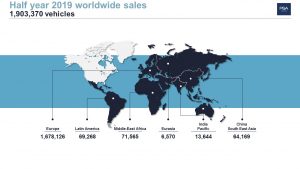 « Despite the decline of the global automotive markets for this first half, our commercial teams have managed to increase market shares in several countries, especially in Europe and Africa. The rigorous deployment of our Core Model and Core Techno strategies is decisive asset to manage profitable sales and enhance customer satisfaction.» says Carlos Tavares, Chairman of the Groupe PSA Managing Board.

Groupe PSA is also preparing a full electrified LCV range by 2025, starting with Citroën Berlingo and Peugeot Partner, already available in an electric version. The new electrified generation of these vehicles for Peugeot, Citroën and Opel/Vauxhall will be available by 2021. The group presented last April a preview of the electrified versions of Peugeot Boxer and Citroën Jumper at the Birmingham Commercial Vehicle Show. It also announced an electrified version for 2020 in the medium van segment.

This performance is driven by the excellent results of Citroën, which has achieved an eight-year sales record with the strongest growth within the Top 12 brands. As a result, the brand has gained 0.3 point in market share in Europe, thanks in particular to the success of its SUV range (C5 Aircross and C3 Aircross).

Opel Vauxhall has continued its development since last autumn and grew slightly its market share. This market share grew among other markets in France (0.2 pt), UK (+0.2 pt) and Italy (+0.7 pt), while the brand at the same time kept its focus on the deployment of profitable sales. Combo, Crossland X, Grandland X carry most of this performance and Opel Vauxhall will benefit from the launch of the new Corsa in the second half of the year.

The Peugeot market share is stable in Europe. Beyond the continuous success of its SUVs 3008/5008, Peugeot is also progressing well thanks to the award-winning 508 family with the launch of the new 508 SW: the 508 sedan is 1st in France since its launch. Peugeot also beats its previous LCV sales record in the 1st semester.

DS Automobiles confirms the brand’s sustainable growth (+1.7% vs 2018 H1, and +16% in Q2 vs 2018 Q2) with DS 7 CROSSBACK – leader in SUV Premium in France during the first half – and DS 3 CROSSBACK, launched in May in France and number 1 in terms of registrations of premium SUVs in June in France.

Groupe PSA is also maintaining its leadership in LCVs with a 24.7% market share.

With the start of production at the Kenitra plant in Morocco, the Group will be able to produce models that meet customers’ expectations and achieve its commercial ambitions in the region.

In a declining Chinese market, sales are down 62.1%. DS maintained its market shares. The Group is working on action plans with its partners to tackle current issues and lower the breakeven point of the JVs.

Electric offensive is underway with the launch of Peugeot 508L PHEV, as well as BEV Peugeot 2008 and DS 3 CROSSBACK in 2020.

Group sales have decreased by 29.3% in Latin America with a strong hit of Argentinean market downturn (-50.3%). However, the group stabilized its market share in Brazil driven by the success of the SUV C4 Cactus and the LCV offensive. It has maintained its position in Chile and improved in Mexico in decreasing markets. Opel made a strong progress in the region increasing its market share.

Some encouraging trend results from the success of SUV models and recent launches: Citroën C5 Aircross and Peugeot 2008 and completed by Citroën C4, Peugeot Rifter and soon
DS 3 CROSSBACK. The LCV offensive is also ongoing with the recent launches of the new Peugeot Partner, Citroën Berlingo and Opel Combo.

The recurring success of the Group in Japan continues with sales up 16%. Groupe PSA achieved another milestone by announcing in April the launch of the Citroën brand in India and starting the production of gearboxes (Hosur plant) with its partner AVTEC Ltd (a CK Birla Group Co.).

Eurasia: prepare the relaunch of the Opel brand

Facing a downward trend of the Russian market (-2.4%), Groupe PSA market share is slightly declining (-0.2pt). The Group is launching DS Automobiles in Ukraine with the first DS Store to open in July. The Group is also preparing the relaunch of the Opel brand in Russia starting with the Zafira Life and the Grandland X, first models to be available in few months.