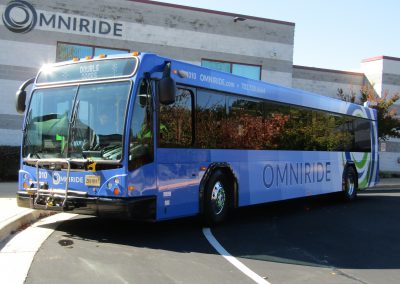 The PRTC Board of Directors has awarded Keolis a five-year contract worth approximately 110 million euros to operate and maintain its OmniRide bus service in Virginia from 1 November 2020.

OmniRide serves William County and its surrounding areas, which count 4.6 million inhabitants who use both the local and commuter bus service into Washington, D.C. A total of 166 buses, adapted for people with reduced mobility, will run on the network which features 26 routes and includes 17 park-and-ride car parks. They will carry around four million passengers per year.

In responding to a competitive procurement, Keolis highlighted its extensive knowledge of the region as the operator of Virginia Railway Express (VRE) and its nationally and internationally renowned expertise in operating and maintaining bus services. Following the award, Keolis will now bring its safety-focused and passenger-centric approach to operating OmniRide’s commuter, local and paratransit service and to maintaining PRTC’s assets.

Keolis, which will integrate 237 new employees, has already begun changeover activities to ensure a smooth transition.

PRTC is also responsible for the VRE commuter rail service, in partnership with the Northern Virginia Transportation Commission, which is operated by Keolis and was recently extended by five years.

“We are excited to work with Keolis. Their team know the region, the expectations, and where we want to go as a service and organization. It’s an exciting time to be a part of OmniRide,” said PRTC/OmniRide’s Executive Director Dr. Bob Schneider.

“We are delighted that the PRTC, our partner of 10 years, has again placed its trust in us with the award of the OmniRide bus network,” said Bernard Tabary, CEO International at Keolis Group.

“They can be reassured that we will focus on safety, continuous improvement, innovation, employee ngagement and transparency. Drawing on our international track record as a multimodal operator, we are committed to offering OmniRide passengers a top quality mobility option offering a safe and reliable alternative to private car use and thereby helping to reduce congestion and pollution”.

“OmniRide plays such a critical role in the mobility of residents of Northern Virginia. We are thrilled to have this opportunity to bring our multimodal, customer-focused expertise to the PRTC with the ddition of OmniRide’s transit services to our portfolio,” said Keolis North America President and CEO Clement Michel. “The Washington D.C. and Northern Virginia metropolitan region is incredibly important to us as it is where Keolis began in the U.S. and the PRTC was one of our first U.S. partners through the VRE contract. We look forward to supporting OmniRide’s leadership and passengers bringing world-class service, innovation, and safety as they travel throughout the region.”

Keolis has been present in North America since 2002, where it carries 116 million passengers on modes including fixed route, paratransit, tram and commuter rail services in 21 cities. Keolis employs 6,000 people in the US and Canada.