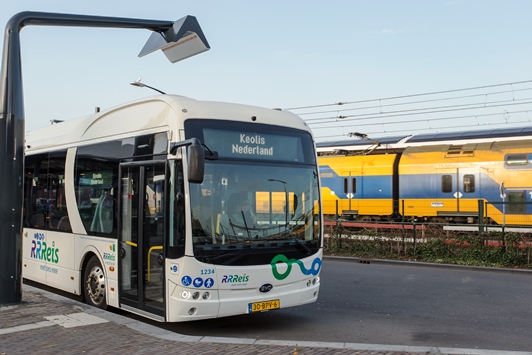 Keolis deploys 246 all-electric buses in the Netherlands, cutting around 16,000 tons of CO2 from its environmental footprint per year

Bernard Tabary, CEO International, Keolis Group said: “We are very pleased to launch such a large number of electric buses in one go which will deliver benefits for both the environment and quality of life for people in these provinces. We are proud to do our part in the wake of the Covid-19 pandemic by helping the two transport authorities rebuild passenger trust and reach their green goals with this safe, comfortable new fleet.”

On 13 December 2020, Keolis’ Netherlands subsidiary rolled out 246 fully electric buses in the provinces of Gelderland and Overijssel, supporting local public transport authorities (PTAs) in their energy transition over the next two years.

The new e-bus network has 120 lines and 50 stations, connecting 180 villages and four medium-sized cities – Apeldoorn, Zwolle, Ede, Deventer – with a total population of 3.1 million. Made by BYD, the 12-metre long vehicles can carry 39 seated and 40 standing passengers, while the 13-metre version has capacity for 41 seated and 14 standing passengers. Replacing the existing diesel fleet, these e-buses are forecast to reduce emissions by 15,755 tonnes of CO2, 5.31 tonnes of nitrogen and 133 kilos of fine particulates over their 25 million kilometre total annual runs. They will also lower noise pollution: an electric-powered bus runs at less than 70 dB, versus 85 dB for diesel.

In recent months, over 800 employees have been trained to operate the e-bus network – 750 as drivers and 50 in planning, logistics, maintenance, HR, marketing and other staff positions. Meanwhile, some bus stations and depots have been upgraded to include 27 pantographs and more than 150 charging stations have been installed at seven bus depots for overnight charging, with a 2 full charge taking 1.5 hours.

clean bus fleets that run on electricity, natural gas, biogas, hydrogen and other alternative fuels that are better for the environment and citizens. The zero-emission bus networks in the Netherlands are the latest in a series of recent or upcoming launches, including:

– the Netherlands, where the Group deployed 14 electric buses (7 in Utrecht province and 7 in Almere) and two hydrogen buses in Gelderland, over the course of 2019 and 2020,

– Norway, where it launched a fossil-free bus network on 1 December 2020. This 138-strong fleet includes 102 all-electric buses,

– Denmark, where Keolis won a contract in April 2020 for mainly electric buses that will operate in Greater Copenhagen from June 2021,

– Sweden, where the Group will operate a biodiesel bus service between Gothenburg and Borås starting in December 2021,

– France, where in 2019 Keolis contributed to the launch of a 100% hydrogen bus rapid transit (BRT) service in the city of Pau, a world first for an 18-metre BRT vehicle. In Amiens, Keolis launched Europe’s first 100% electric BRT service (43 buses), also in 2019.