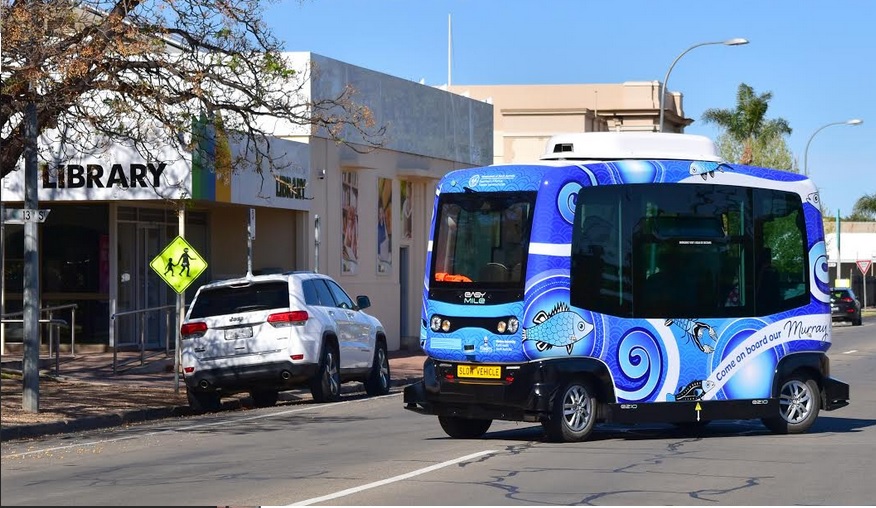 Since 9 February 2021, Keolis has been testing a new autonomous electric shuttle in Renmark, a city of 10,000 residents 200 km from Adelaide in South Australia. Its visitors and residents are invited to use this service which is particularly adapted to people with reduced mobility.

Running on open roads, the EZ10 autonomous shuttle made by EasyMile, serves the Renmark riverfront and a number of key locations, including the municipal swimming pool, supermarket and other food outlets. With six stops along a 2.4 km loop through the city centre, the autonomous shuttle provides a free hop-on hop-off service every 30 minutes on Tuesdays, Wednesday and Saturdays.

During the trial phase, an onboard security operator is present at all times in the event of an emergency (such as the need for emergency braking), as well as to guide passengers during their journey and raise awareness of the project.

Five Keolis Downer staff have been assigned to the project for the four months of the trial.

Integrating GPS, a range of cameras and sensors for odometry and extensive safety features, information is constantly shared between the EZ10 autonomous electric shuttle and its environment and urban infrastructure (such as traffic lights). As a result, the shuttle is able to analyse and adapt its speed accordingly.

The purpose of the trial is to demonstrate the ability of autonomous vehicles to integrate and adapt to an urban area, and to contribute to the development of smart city solutions. Autonomous shuttles also provide local communities with a first and last mile solution by improving their access to public transport. They are an inclusive mode of transport, adapted to passengers with reduced mobility. Furthermore, with their current five-passenger capacities, they meet social distancing requirements[1].

Keolis’ commitment to paving the way for full autonomy

Since 2016 when Keolis trialled the first autonomous electric shuttle in Lyon, France, it has conducted over 30 autonomous electric vehicle trials throughout the world in major cities such as Paris, London, Montréal and Las Vegas, carrying more than 140,000 passengers on driverless vehicles every year.

Trials such as this one in Renmark are key to facilitating the safe introduction of autonomous electric vehicles to urban areas. Open-road trials are a major step forward in enhancing the capabilities of autonomous shuttles.