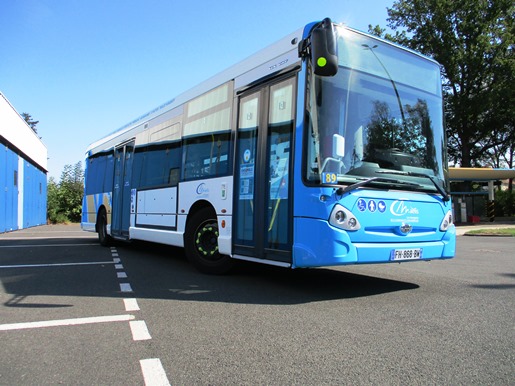 Keolis renewed in Montluçon, France, with the aim of strengthening the mobility offer in the region

the conurbation authority of Montluçon renewed its contract with
Keolis for the management and operation of the mobility services on the Maelis
city transport network.
 This new public service delegation contract began on 1 August 2021 and will run
for five years, generating cumulative revenues of approximately €19 million. It will
include an extension of the area served from 1 September 2021 and an overhaul
of the network from 1 January 2022.
 The aim of Keolis is to strengthen the mobility offer throughout the region,
notably by means of an extended on-demand transport offer, an increase in the
rental bicycle fleet and the launch of new digital tools.
An extended and enhanced transport offer
Intended to serve a population of 65,000 in the city of Montluçon and 20 other municipalities
of the conurbation authority, the Maelis network, which currently consists of eight city lines,
eight school lines, an on-demand transport service and electric bike rental service, will feature
a number of changes between now and January 2022, such as:
 An improved urban transport offer, via:
– Increased bus frequencies, particularly along the three main routes in the region
(every 30 minutes as opposed to 40 to 45 minutes at present), while maintaining a
high frequency of every 15 minutes for the line connecting main transit centres and
the densely populated districts of Montluçon.
– An improved bus service at the train station with 43 buses per day (previously
about 10), in line with the active approach adopted by the conurbation authority of
Montluçon to reinforce intramodality.
– An increased bike fleet from 50 to 100 bicycles, distributed over 11 collection points
throughout the conurbation by March 2022. At the same time, Keolis will deploy a
digital solution for the bike-sharing service, featuring online reservation and
payment.
– The introduction of an on-demand transport offer for workers, including an
extension of the bus timetable for the four main lines in the region (from 06:00 in the
morning instead of 07:30 and until 21:30 instead of 19:00).
 Improved services for suburban communities, through:
– Optimized, reinforced school services, particularly with the integration of six new
school routes serving rural communities in the south of the conurbation.
– The extension of urban lines to certain suburban municipalities at the entrance
of the conurbation.
– The overhaul of the on-demand transport service, available in 11 new
municipalities, now arranged into three zones, linked to the points of interest in the
region (station, hospital, aquatic centre, shopping centres). Passengers will also be
able to book their journeys up to two hours before departure. The service will be
available until 18:00 (previously until 16:30).
A more connected, simplified transport offer in terms of fares
In order to modernise the network and facilitate the customer experience, the Maelis transport
network will provide passengers with:
 Real-time information for the entire network (including school routes), accessible
online and via smartphone, through the deployment of a new passenger information
system (SAEIV) in autumn 2021.
 A single contactless ticket that can be used across different modes within the
network (including on-demand transport service and school routes), thanks to the
extension of the digital ticketing system introduced on urban lines in 2019.
 A structural overhaul of the fare system, starting on 1 January 2022, for greater
fairness and simplicity. This will include the introduction of a post-payment solution
(invoicing at the end of the month, according to the number of journeys made) and
reduced fares for passengers aged over 65 and under 26, while maintaining a 50%
solidarity reduction for every subscriber.
 In spring 2022, an online subscription service dedicated to schoolchildren will be
created to enable families and schools to obtain information.
Keolis confirms its presence in the region of Auvergne-Rhône-Alpes
With the renewal of this contract, Keolis further strengthens its footprint in the region. In
addition to the Montluçon network, Keolis Group notably operates those of the conurbations
of Lyon, Chambéry, Moulins, Bourg-en-Bresse, Oyonnax, Riom, Thiers, Villefranchesur-
Saône, Bourgoin-Jallieu, the valley of Grésivaudan and Nyons, as well as inter-city and
school routes on behalf of the Auvergne-Rhône-Alpes region.