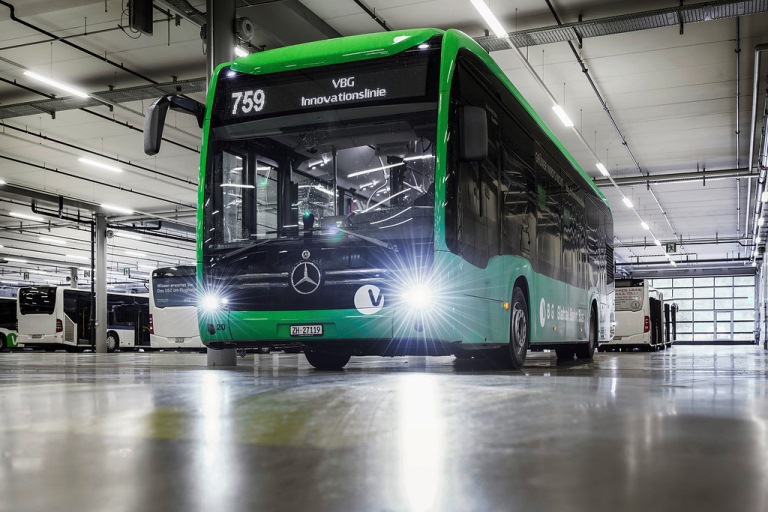 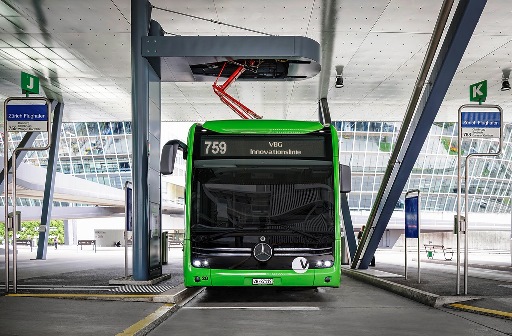 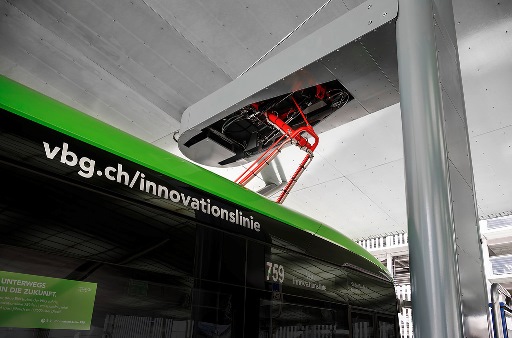 Operating under extreme conditions in Switzerland:

The new version of the eCitaro with charging rail equipment for rapid intermediate charging makes this all possible: Verkehrsbetriebe Glattal (VBG), a transport corporation near Zurich, is planning to operate the Mercedes-Benz eCitaro from September almost around the clock on its regular bus service. The low-floor city bus with fully electric drive will be able to prove just how highly efficient it is.

Initially there was equipment with a charging socket on the right-hand side, then other charging socket positions, the pantograph, and now we see the premiere for charging via rail equipment: not only the battery, but also the charging technology of the Mercedes-Benz eCitaro has a modular design. This enables the electric city bus to adapt flexibly to the needs of the public transport companies. With a plug the eCitaro can be charged rapidly with up to 150 kW charging output, and with pantograph and charging rail it can even be charged with a high-power charging capacity of up to 300 kW. The difference is that with a pantograph the electricity collectors are positioned on the roof of the city bus. These are extended underneath a charging station. For the version with charging rails, it is the other way around: the contact is established from above via a pantograph from the charging station. The eCitaro for the Swiss VBG Verkehrsbetriebe Glattal AG is particularly flexible: in addition to charging rails, it has two charging sockets, one each left and right, above the front wheel arches.

The eCitaro will travel on the innovative bus route number 759 of VBG. This service is between the town of Wangen and Zurich Airport. The length of one full circuit is 27.4 kilometres and there are 28 stops. On this route, the corporation will test innovative technology on a regular service. The aim is to make it the first fully-electric bus route of the VBG. Until now, seven diesel buses have been in operation. In the course of a year they travel a total of about 635,000 kilometres and consume about 235,000 litres of diesel. The challenge for the eCitaro: during operation, the batteries are only charged during the short waiting time at the Zurich airport terminus, via charging rails. In addition, there is one night-time charge via plug at the depot. The electricity is 100 percent from renewable sources. The eCitaro for the VBG stores its energy in batteries with a total capacity of 264 kWh.

Driver and passengers benefit from high-quality comfort and safety equipment

The three doors of the solo bus ensure rapid passenger flow at bus stops. To make work easier for the staff, all the doors are equipped with an automatic function. In general, the VBG cares about drivers’ well-being, as is shown by the equipment with air conditioning and heating for the driver’s seat, electrically adjustable lumbar support and a refrigerator box.

Passengers can sit on City Star Eco seats from Mercedes-Benz. The grey-green covers of the seat and the backrest are in the VBG’s own colours. A special space for wheelchairs, prams and buggies and folding seats opposite door two; two TFT monitors providing passenger information, and ambient lighting over each row of seats are all features of the VBG eCitaro.

The high-standard safety equipment of the eCitaro includes the active braking assistance system Preventive Brake Assist and the turning assistance system Sideguard Assist. A special level of safety is ensured by means of cameras monitoring the three doors and the interior.

The VBG Verkehrsbetriebe Glattal AG with its headquarters in Glattbrugg operates for the Zürcher Verkehrsverbund (ZVV) and is responsible for public transport in the Glattal and Furttal valley regions and in the Effretikon/Volketswil districts. The area comprises 22 boroughs. The VBG was founded in 1993 and it is owned by the boroughs in its market area, and by the Canton of Zurich. It runs more than 50 scheduled bus routes and the two train routes of the Glattalbahn. Approximately 119 buses transported 22.6 million passengers last year.